I don’t know whose idea it was to wear these bloody stupid robes…they don’t half ich. How can we concentrate on awakening Elder Gods such as the great Hastur when all we do is suffer insurmountable torment from the itching caused by this course-weave elephant hair smock!

(Press play for a tiny spot of Occult Background Ambience)

…and now not only that, but there’s also a scary group of Occultists knocking about, hellbent on undoing all of our illdoings…and Detectives/Investigatores out and about trying to route out our secret order (I don’t think the addition of large embroidered “Cult of the Transcendance” back patches was the most inconspicuous of ideas)…oh, and some smart Aleck Scholar chappie with his sneaky, snivelling apprentice carrying out research to foil everyone’s plans…

What’s All The Fuss About?

Hastor, the pastor lover Elder god is at the root of all things Cultish here. This is a tile laying game in the Carcassonne playing field…(and Carcassonne Central @Carcassonne were involved in playtesting, as I am lead to believe) but goes beyond laying tiles to create roads and towns. This little offering from One Free Elephant has Cultists, Occultists, Detectives, Scholars and even Thugs…what more could you want in a game? A spot of light Lovecraftian theme perhaps? Carcosa has you covered there. Initially a multiplayer game where groups of rival Cultists try to out ritual each other…during the game’s Kickstarter campaign demand was such that designer Nigel Kennington was forced back to the drawing board to try and conceive a solo variant to make it a 1-4 player game. Was he successful? Does the Lovecraft theme cover up cracks in the plaster? Do Cultists wear anything beneath their dark ritualistic robes?

….some, all or none of these questions will be answered .

I have to speak purely from the solo game perspective here as there are some small, but significant differences to the multiplayer game. We have ourselves here the age-old Lovecraftian theme, flogged to death by so many games, true, but in this case it is somewhat abstracted and from one of the forces of evil’s viewpoint. The illustrations creat a dark, foreboding  setting. A Cultist backdrop, if you like, but there is a distinct deep involvement in what we do. We are not merely selecting a tile to lay down in  the playing area, matching it up with previously laid tiles to create pathways and  urbanised regions

(as is the case with our old friend, Carcassonne…a source of inspiration for the game) to help us score victory points. This is a tense battle between Cultists, Occultists, Detectives and Scholars (researching into the powers of the Elder Gods and the like) A fundamental abstraction develops substance and meaning. We have a goal and multiple foes seeking to thwart or beat us to our objective. Now, although it doesn’t make me feel like chanting and relinquishing all earthly possessions to join a cult, I do feel I am caught up in a battle to resurrect some malevolent evil… a disgusting world dominating yellow evil!

The actual playing of the solo game is relatively simple and straight forward as it happens. Draw a tile, play a tile (that connects to an existing tile) and plonk a meeple Cultist on an unoccupied ley line (line of dark power…like a road in Carcassonne) or on a District of Hastur (town or city)…and that’s pretty much it. Then, of course, we have opportunity to complete a Dark Ritual which is basically us scoring from completed lines or districts we occupy.

That is indeed it. However, we have to bear in mind both our own player token and that of the Scholar is places on top of the stack most recently drawn from, consequently this action effectively blocks two piles for subsequent turn selection. Tactical drawing can work to our advantage but often our plans are scuppered by cunning Scholar movement. If the Scholar and the assistant reach zero, they have sufficient research to go to the mortal authorities to unmask our plans….AND game over. 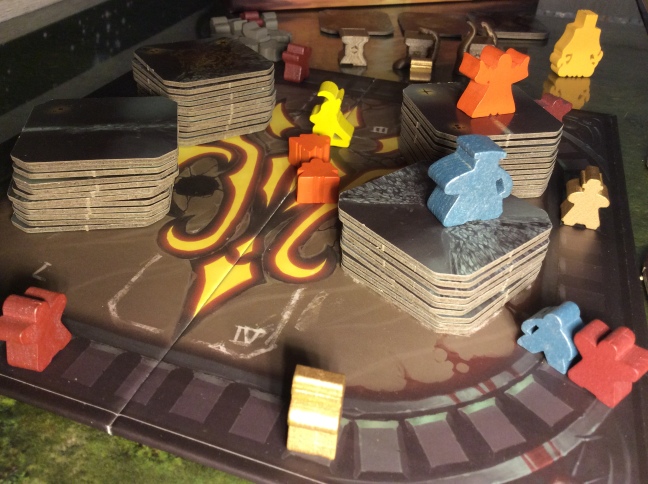 We then have to factor in the shifty looking Scholar’s apprentice or assistent…which ever role suits best…who works its shifty way around the shifty score board in an anticlockwise shifty fashion. This movement is dependant on the value of the tile drawn as part of the Scholar’s research turn ( basically drawing a tile, moving meeple accordingly and denying us a potentially useful tile)

As we complete our Rituals, scoring lovely victory points, our Oracle makes its way up the score board passing Occultist meeples and Detectives…Investigators?…general busybodies who are also after foiling our Cultist’ ways. Just passing, I say! No such luck. As soon as we pass an Occultist, they spring into action, suspicious of our activity and envious of our stylish robes. They get placed on the gaming area (according to their own hierarchy of placement requirements) and stop us from occupying new sites and hinder our Rituals….and those bloody Investigator types (usually the “good” guys in most Arkham settings but this time, for us, they are indeed the baddies). On the tiles they go and start chasing us all over.

There ar, additionally, many subtle intricacies beyond this too, altering difficulty, elements to further aid or hinder us but as you can see. I really is our lowly band of Cultists against the WHOLE DAMNED WORLD!

This does feel a lavish production in a box that does not waste space. Illustrations, printing quality, thickness of components and finish of wooden meeples all sets a very high standard…and the copy I have also contains the “blingy” pack especially for solo play (but not necessary for said mode) with semi-metallic paint finish on custom Occultists, Detectives and Scholar meeples. All in all this feels a pleasure to handle…for those analogue gamers who enjoy the tactile nature of well made components.

Nigel had to bow down under the insurmountable weight of requests from backers of Carcosa to develop, from the ground up, a new and previously un-intended variant for a multiplayer game. The results, in my mind, are a spectacular piece of engeneerig…so much so that I actually feel the solo game could well be a more exciting game experience than the multiplayer…but not to discredit its primary role, multiplayer is a good game…remeber, though, that this really isn’t why we are here. We want to know if we, the soloist, have the same experience as multiplayers. Well, in this case, we don’t have exactly the same game. Most mechanics, aim of the game and general procedures are the very same but the way the solo AI has been developed gives us a whole new competitive experience, which I suppose could be achieved in multiplayer but as it stands, we solo players get the main game feel and some! 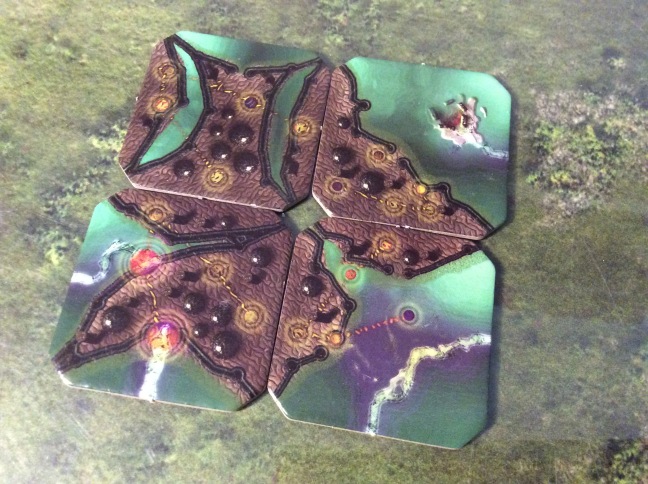 There are some clever little elements dovetailed in for good measure to alter difficulty of play, a couple of win conditions for us and at least three ways to lose. It is an interesting puzzle to manipulate with so many opposing factors to consider. After playing this, Carcassonne will henceforth forever be a bland experience.

My first experience was after chatting with Nigel at Airecon 18 about the solo variant (in the very early days of BSoMT. I took a copy out of the lending library and tried it out…but it was not until more recently that I had opportunity to really sink my teeth into the game…and by the Language of Archaic Astronomy was it exciting. A very simple but effective mechanism to not only score for the AI using the tiles drawn by the Scholar sending the apprentice shooting down the score track at an alarming rate of knots, but also the simple tile stack blocking. Me, accompanied myself, started to use the potential movement directive of the Scholar to benefit our collective goals…but ensuring Cultist meeples were available in sufficient quantities, spending time in the infermary curing their boughts of insanity,

to score points on their energy ley lines as well as hindering the Aprentis’ progress…a logistical nightmare…and don’t get me started on the Occultists popping up everywhere, pinching all the good locations. Fortunately I had little bother with “the plod”. The lumbering detectives were easily avoided…but still a hindrance nonetheless.

This proved to be a most engaging, frustrating at times, enjoyable delve into all things dark and Elder God-ish. It has proven to be a very good interpretation of the multiplayer game and offers a soloist player great challenge, difficult choices and a more engaging/thematic variation of the age-old Carcassonne.

The power behind the agents of chaos has served the Will of The King, not to seek the glory of Carcosa but to roll the BSoMT 1d8 die for a terrible purpose…and in such achieves an Occult Power roll of  (7). Definitely a must for soloists and lovers of all that is Lovecraftian! A Carcassonn-like experience for solo players with so much more crammed into the small box. 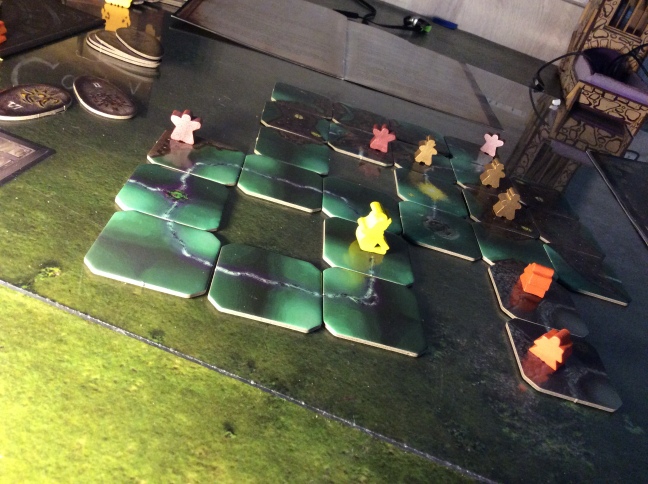 …as it happens the Cultists and the Occultists all choose to adorn hefty undergarments to combat the itch of the Ritual robe material. I wished I had found that out beforehand. I can’t possible describe the places I am itching and the draught….it really does blow down the valley…ooooh, quick…leg it! Her come the Rozzers!