…living in rural Shropshire, surrounded by acres of fields and a gazillion Friesians, I never once thought that I resembled a cow. OK, I am not as thin as thirty or forty years ago but don’t feel my man-boobs have reached udder proportions yet…but that is just how ‘they’ see me…meat, a slave or a scientific plaything!

(Press play for an Alien Food Processing ambience to accompany your read!)

A delightful message from our alien invaders…

“Welcome, Human/cows. before we start, we’d like to congratulate you on your planet’s valiant struggle against our invasion. That truly was the bravest and most glorious 42 minutes in the history of your species. Based on your forts, we the Confederated Alien Overlords (CAOs) have reserved you a possible position in the new regime. To earn that place you must serve!

What’s All The Fuss About?

Something a little out of BSoMT’s normal spectrum of coverage today…and a little favour for a fellow reviewer. So what do we have here? This is a culmination of numerous games played and reviewed blind…I was able to see, by the way. I mean I had no previous knowledge of this title so it was an interesting voyage of discovery…as it were.

It says on the label that it’s a game of Serving humanity…which confused me at first thinking that the Alina saucer above this sentence hinted at tentacle bestrewed, squishy being from outer space taking over us …so why would they be serving humans? …then I realised it meant humanity was pressed in to servitude. It is, in fact, a strange concept indeed. We are processing the remains of humanity… and cows, on a sorting production line. We are striving to process the most ‘units’ to earn our freedom from alien servitude. Where the game’s oddity lies is within the ‘sorting’ process. Unlike Hairy Potty where a magical hat sorts the Chaffee from the wheat, we are stood on the active sidelines of a conveyor belt, along which traverse an endless procession of chaps wearing hats and false beards and bulbous cows. Our job is to vote for each individual to become part of the food chain, be set free or….dom dom dom…be sent for ‘probing’. An obsession or fixation attributed to pretty much any invading alien consortium…I even have my doubts about ET and his glowing dialling finger.

The background is set. The conveyor belt is loaded, a grotesque suckered I get presses the Go button, and we have a job to do. It is an unusual and rather amusing theme but ties in nicely with the main mechanics of the game. As we are in competition with our fellow sorters, there is an element of psychological bluffing, double bluffing, triple bluffing but also opportunity to negotiate temporary aid with one another… assuming we can convince our rivals to lend a helping hand (possibly even to go into the mangle). The humorous alien illustrations add to the look of the game and much of the graphic representation (although still in prototype form) add to the whole aesthetic. Altimately, it is a light group game, so theme will not immerse us too deeply into an alien run Earth-wide economy with all of its nuances, but the mechanics fit the them and vice versa, so we should all be happy with that.

In essence the game is very straight forward. We vote for a cow of bearded bloke, deciding if they are whisked off to the meat-packing factory, let go with freedom of the city or get sent for certain unceremonious probing… which reminds me of the brilliant expression of one of the cows on a probing card. That made me giggle rather a lot, child that I am!

But there is actually a greater depth of play than all that suggests. We all have voting chips which are laid, one per player in rotation, on any card of our choosing along the conveyor belt. The process is repeated until we have all voted with all nine of our chits (three for each Fate). Any card containing chits in all four voting slots is tallied and placed above either Probe, Process or Free, depending upon the majority vote. Then the game gets interesting as we enter the scoring phase, which is actually part of a round… as opposed to the usual ‘do all your stuff then score at the end’ routine found in many other games.

Scoring is actually quite a tactical affair when it comes down to it. We select one of our Alien Agenda cards, place it face down then do a group reveal. We all reference the beardy hat blokes and cow headsicons present on each card above a Fate card and reward ourselves with glorious star points accordingly. To exemplify this let’s say my alien wants cows to be probed because that is its sick hobby, then I would score a point per cow head on all the cards stacked above the Probe Fate card. All simple and non-brain taxing so far, I hear you utter, but wait one moment. I could have a second Alien Agenda for beards  to be made into meat and score even more points for each set of whiskers… but if my alien overlord hates cows with a passion and there are cows in the Freedom pile, I will incur Mad cow points for failing to heed my alien overlord’s needs and reap my insolent rewards as Mad Cow points. These scoring mechanics lead to some interesting tactical voting in the earlier stages of the game (predicting our bst outcomes vs Agenda cards) but also allows a certain manipulation of the scoring system as, although maxing out on the mad cow score tracker results in an instant loss of the game, there are certain benefits from being ahead in the mad cow race. This is principally due to bonus points that can be awarded in the Passive Aggressive variant of the game. We can train said points for grassing off or annoying the aliens, and consequently earning mad cow points can be translated into real life victory points too ….a very fine line between success and failure… if the gamble pays off.

The set I have is a prototype and I am sure there may be certain tweaks and modifications made during the upcoming Kickstarter campaign but as it stands everything has a distinct professional feel to it. 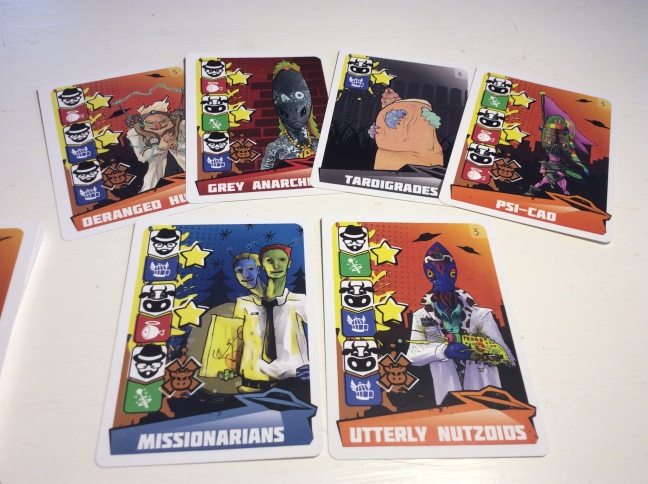 The artwork looks good, the rulebook is a sturdy booklet and, although quite small, I really like the laser cut tokens. It is petty and purely down to my tastes, but I am not such a fan of the cow/bearded men icons…although I understand the need for them to be simple and clear….and the box art…but it does have a certain 1950’s B movie sci-If feel, which may, after all, be what the designer was after.

This is not designed for solo, coop or any variety of individual gam play at present…and as it involves a voting system, I am not sure how this could be effectively emulated…but one can but hope. If the designers had a mind to creat an AI system to operate two opponents, this would actually make quite an entertaining three player solo game.

Me, Myself and I were joined by No.2 daughter and Mars P to test out gameplay… so it could be said that there were five of us sat around both sides of my table. We had an entertaining time with this title. Simple enough to get into quickly, but enough tactical voting and scoring…and bluffing… and double bluffing to keep us amuse throughout the speedy gameplay. It is nice to not have much downtime… in fact, as voting goes so quickly we are really talking about seconds of down time… and everyone is a participant in the scoring stage so, a particularly engaging game from that perspective. There are, obviously, hours of potential hilarity to be gained from the “probing” aspect of the game… which perhaps says something about my family’s sense of humour. So maybe if warped humour isn’t your thing, this might not be as entertaining for you, but the game itself is not really about twisted humour… it is more about the game mechanics. The entertainment we derived from the game was an added bonus. 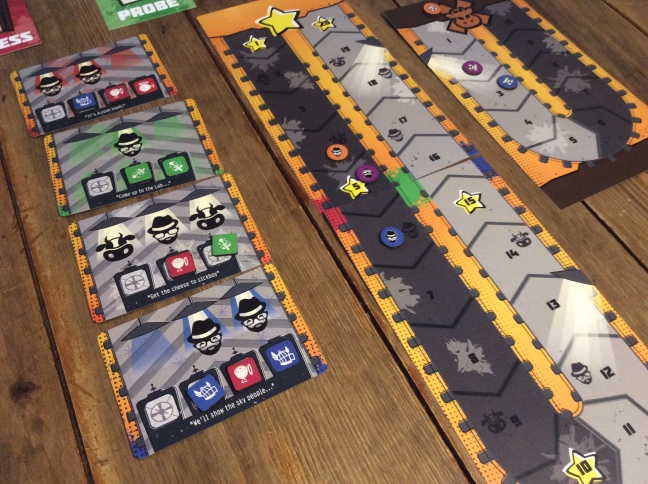 I think this is Definitely a Yay! As this is not a solo accessible game I cannot justifiably roll the BSoMT 1d8 die but that said, this is an entertaining, family friendly (if not slightly odd theme for young players) multiplayer game and more enjoyable than I initially though it might be. I recommend checking out the campaign page when it goes live to find out more about the game.

…right you bloody heifers, time for some unadulterated internal exploration for you…Probing gets my vote…Ha ha ha…oh, pants! my Overlord is a Minotaurian…and I’m gonna get a shed load of Mad Cow tokens for this…He’ll be well pissed off (which could work to my advantage)…perhaps I could undermine the CAO’s from within the system! 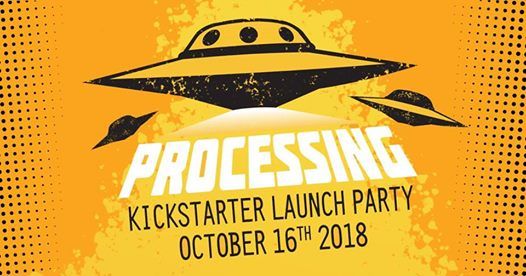