Hiiiiiii Hooooo …Hi Ho, Hi Ho, it’s off to work we go… what a load of old tosh! Anyone who is any one knows dwarves don’t march off to work in a mine, sporting primary coloured floppy hats. Dwarves wear dirty, grease stained overalls and work in a factory… THE factory… Factory 42

Something quite different has emerged from the house of Dragon Dawn. In the world of Zanziar, the various factions are all happily expanding and exploiting and fighting … and goodness knows what else, but these adventure parties don’t just miraculously equip themselves. Their clobbber must come from somewhere, and that somewhere is Factory 42.

Even in prototype form the game looks intriguing with its blend of industrial and fantasy themes but does a fancy exterior hide cracks and flaws inside?

I’ve never worked in a big industrial factory so am unable to state categorically whether this replicates such an establishment, but in game terms it has so much going on turn by turn, that the process of turning raw materials into rivets, swords, armour or novelty condoms (I guess here because I have no idea what factories really make) feels as if we are actually deep within that industrial process. There is an interesting backstory, relatable setting and engaging gameplay that all combine to make this a particularly immersive experience 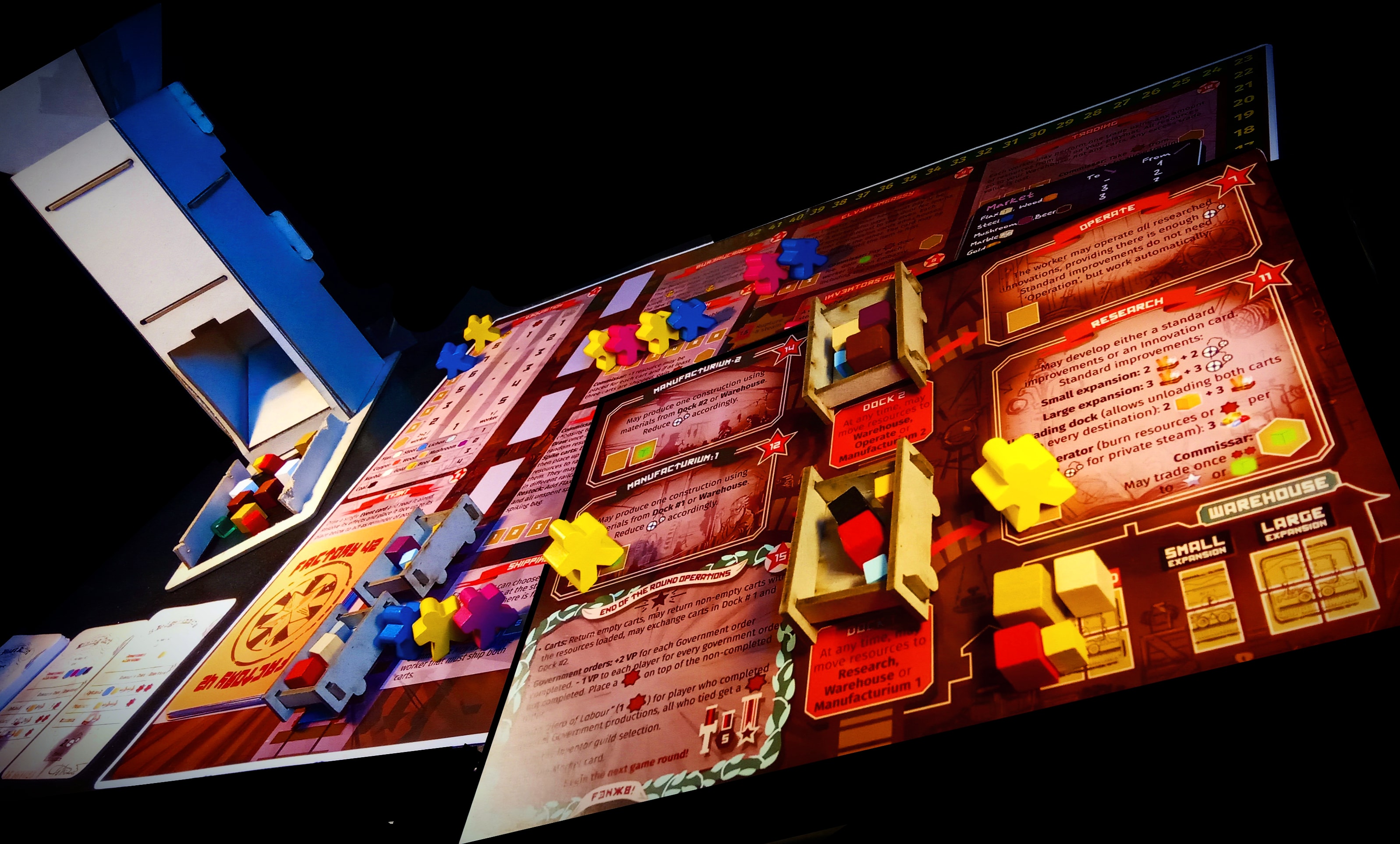 As worker placement games go, I have seen a couple that were more complex, but that having been said, this certainly has a lot going on and the intricate relationship between each area of worker placement throws up a wealth of interesting situations.

In its simplest terms, we place our worker meeples, one at a time in turn order, on the numerous placement spaces available on the central board (such as loading rail trucks, shipping trucks, building things, researching technologies, acquiring resources for the common good, bribing and underhand dealing… and so on) Once we have placed our downtrodden workers, we resolve each area in a specific order. Now, nothing particularly ground breaking at this stage until we discover the consequences of our placement during the resolution phase. Most placement areas on the main board can accommodate numerous workers and many also have a Commissar spot to wondrously promote one worker to a more powerful chap or chappess. It is now that the subtle nuances begin to reveal themselves. The order of placement in each section can impact dramatically on subsequent sections’ resolution. Loading the rail carts, for example. Let us say we are first to load bountiful resources such as gold and beer onto carts sat on the track. This may seem to be advantageous until we realise our meeple on the “shipping action” location is not first… so we are in effect potentially loading for another player… Options are, if we have blundered with our meeple placement, to aid, thwart or otherwise mess with our opponents… And so each location can effect the resolution outcome of subsequent placement areas on the board. 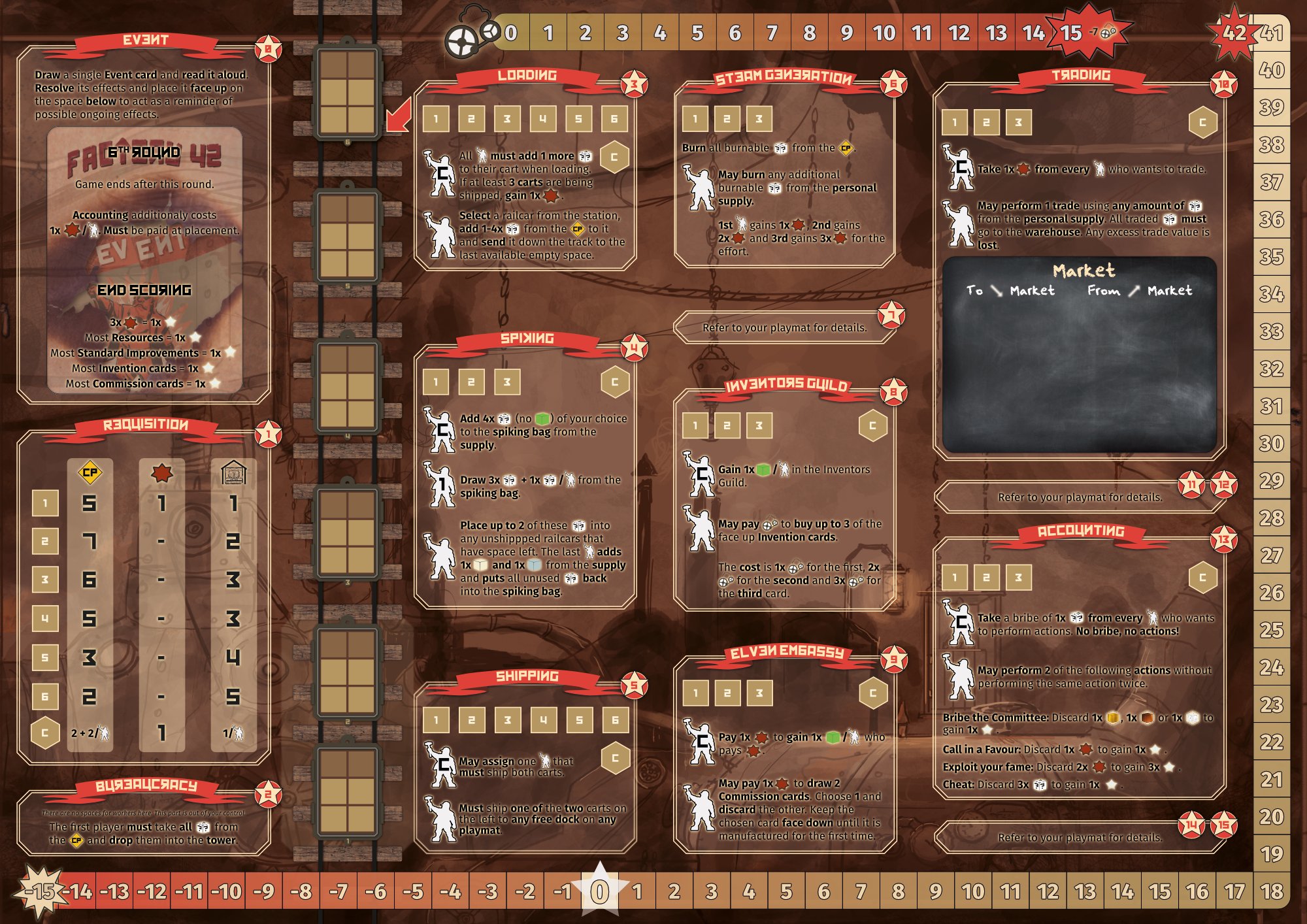 Beyond the day to day placement of our meeples in the factory, we have government involvement… which is never a good thing. Governments dictate the state of play. They have specific orders that must be fulfilled each game turn by the factory, or consequence may follow. This means that our competitors, our rival foremen have to cooperate with us (to a degree) in order to fulfil government orders and reap the rewards. The Elven council also have their own needs and, as they are a… let’s say, a more private enterprise, their orders are big but very lucrative (way better than the government orders). Oh decisions decisions… there is just not enough time to please everyone.

Speaking of government involvement. Where there is politics there is corruption and the resource deployment tower is a particularly cool resource delivery system that mimics the mysterious disappearance of resources, taxation and other official levies. The common resource pool is built up during a game turn, then tipped unceremoniously into the tower. A cunning arrangement inside restricts the dropping of the multi-sized resources and not all that enters, emerges for common use. It is a nice touch that can further thwart an otherwise fool proof strategy, levelling out the playing field.

I have only a prototype copy and my tower and carts were laser cut grey card. However, these shots show how the final components should look in the production copy. The tower does look particularly good.

This is for two to four players and at this stage there is not a solo option, but if GMT can make their COIN games 100% soloable, I don’t see why some form of AI logic flowchart decision making system could not be devised for Factory 42.

I have not really played any very heavy worker placement games so this, although not so heavy, was quite unfamiliar territory for me. There are many places to send the workers and each has subtle effects on the others… It did take a couple of games before the nuances became apparent and I was able to take advantage of order of placement. We have government orders to fulfil, resources to gather and ship, improvements to make to our storage facilities, inventions to research and create… oh, and I nearly forgot… the factory runs on steam. Pretty much all we do relies on feeding the steam generator… but unused resources also get incinerated and there is always a risk of the boiler blowing. This can impact greatly on the resolution of the placement areas… managing resources is suddenly even more important

Just so much is going on and so little time to achieve it all. I was lucky enough to play a physical game over the internet with members of the Dragon dawn team, which was an interesting learning experience… to see where meeples were place and in what order… a great learning experience for honing my strategies.

This really is a cunning, cooperatively competitive, backstabbing game. But there is so much going on every round, with very quick player turns and minimal down time… yes and even the down time must be spent watching out for what everyone else is doing… or the knife may just become lodged in our own back.

For me there was a steep learning curve as I am unfamiliar with the genre as a whole, but also because of the intricate relationship of each placement area, it felt so very different to everything I have played (or even those I have seen played). There is definitely so much to engage and entertain us in this game that me, myself and I thoroughly enjoyed the experience.

It takes a little time to become familiar with the game, but it is all most logical and quite accessible to players of most ability levels and offers us so much to do during the game. It looks great and plays even better. I’d recommend this to groups of players who love strategy, who love to mess with each other and who love a challenge

The Factory 42 resource tower spat out the BsoMT 1d8 die, shipped it to the warehouse and reformed it on the production line into a 7

Now I’ve dawdled enough… we’re only supposed to spend ten minutes on a tea break once every 18 hours… back to my production line. I have another 280,000 rivet winter head caps to polish

Something For The Weekend Sir?