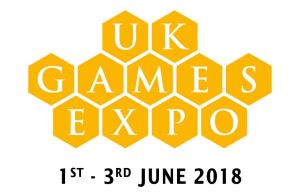 For the first time ever, in the history of all things that are boardgamey, BSoMT has been granted press approval, not just for UKGE, but for anywhere…it’s official….time to get professional. I am thoroughly grateful that I decided to wear my heavy absorbance undergarments, as the potential for accidents on the run up to the con were exceptionally high.

And so my journey begins on an innocent Thursday afternoon by collecting Both Sides of My Hotel and dragging it 60+ miles down the M6. & M5. carparks…approaching rush hour….what could possibly go wrong?

…surprisingly nothing. Traffic was slow through the miles of traffic cones identifying part of the national “make work” scheme, but I arrived with an hour to spare at a secret location a few miles from the NEC. Hotel set up, BSoMT shirt on, NEC bound I was. And then the M42 turned into an eight lane carpark…

…I had still to pick up my pass and make it to the press meeting area. I uttered a mild expression of my frustration, and as if the “all seeing traffic jam God” heard my call, movement, albeit imperceptible at first, commenced.

NEC parking…free bus shuttle (sooooo useful to save the 324 mile walk from the official car park to the door), surprisingly small queue at the ticket desc and a quick shuffle up to hall two….and there they were. All the official types, many I recognised……from their logo’s…I had no clue who pretty much everyone was (as I always have my finger on the pulse of what is what and who is who of the  oardgaming world)

My first ever press preview was about to begin… 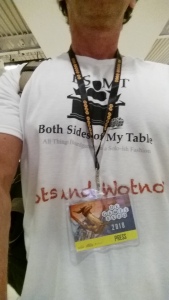 This year’s UKGE, as I have been all official like, has involved a goodly number of interviews and lengthy chats with designers and publishers about all manner of Solo related topics and as such there is s significant shed load of stuff to feed back. Because I didn’t want to bore you all by producing a piece as lengthy as War & Peace, which would take equally as long to read as the period the novel was set in, I have decided to break it down into four, more digestible parts, written in organic digital format free from additives and preservatives. Only the names, facts and all details have been changed to protect the innocent…actually no….all names and facts are true.

There is no preferential ordering…it is mostly down to the order the photographs uploaded to WordPress.