…now under normal circumstances I would be sporting my top-man flying jacket, sturdy brown open toed flying boots, steamed up flying goggles and a tatty scarf with sewn in wire hem (to make it look like I am in flight, even of the ground)…but no. Not today. Today I have swapped my flight suit for a set of grubby grey overalls, a pair of oversized gloves (left hand having only 3 finger spaces for some reason) and a *Clarkson screwdriver.

Why? I hear you ask. Well, today I and in the construction business. Today I am building me an aircraft for sale on the open market…

So come with me now as I dip a tentative toe into the aircraft manufacturing business. Planecrafters by Paisley Games set in Crumplehorn where potential aviators are keen to get their sweaty little hands on the newest of the new aircraft to help them take to the air and dominate the skies.

In this more rare occasion the fuss is about a rather snappy little card game for ….more than one player. Yes I know. Sit down and I shall elaborate…

…and by elaborate I mean lift from the rule book…but it is far more concise that I ever could be with my inane meandering off topic!

Interestingly this is a game about early days of aviation in a somewhat fictitious setting…but flying said craft has little or nothing to do with the game. The early aviators are almost incidental…other than they are the once creating market demand for unusual flying machines. We, the players, own, hire, fire, buy, build and sell in an early aviation factory. We are the builders of this world and strive to produce a better product than our competitors in a rather cutthroat market place. The theme is visually strong and the gameplay/mechanics certainly lend themselves to that same theme. I felt immersed into this fantasy-like world as there is back story to characters and the world itself that sets an interesting scene. The gameplay, and the way we work our way from round to round fits the theme but, as this is a lighter game, mechanics are not intrinsic to the them as would br found in some heavy euro games…but it is not a glossy veneer of some Ameri-trash game either. There is a high element of fun and I doubt we are to take the game too serious. That said, it is a seriously cool game to play…ooops…minor spoiler!

I have cheated here and lifted directly from the rule book…but as the game is very streight forward, I do not feel the need to wax lyrical…but as simple as the game is, there is a good layer fo strategic planning needed to out build your rival factories. 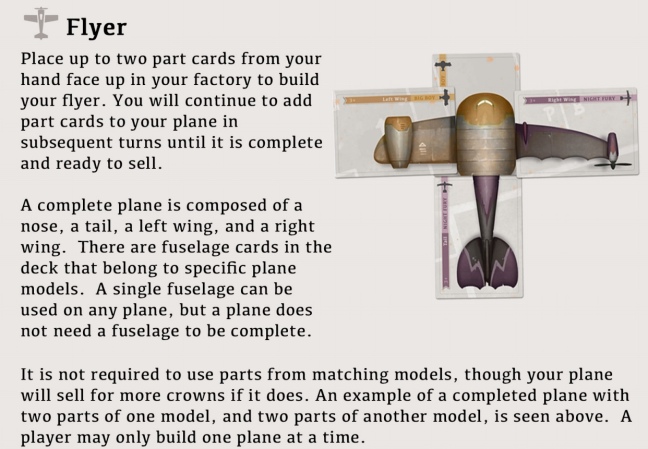 Putting these rickety devices together is quite entertaining and the mad combinations, although not integral to the scoring other than multiples of similar models help score higher, it does give rise to conversation between rivals.

So there you have it in a nut shel…or more appropriately a fuselage shell. Buy, build, hire and sell. The more coherent a plane is, the more cash but pretty much anything makes it into the air. Health and safety is a concept unheard of here.

As it stands, I have been using print and play components for my games…but the colour pallet, choice of graphic/icons and illustrative style are pretty spectacular.

There is a distinct cohesive feel to the game. Obviously component quality will be dependant on the success of the upcoming Kickstarter campaign, but I am sure the end product will not disappoint backers

As it goes, this is from 2-4 players and I am sure you are sceptical with regards the validity of Planecrafters on BSoMT.

Well, firstly I liked the look of the game and was immediately intrigued by the madness that was the ‘bolting’ of all manner of pats together just to make a flying machine …but also because I did wonder if a solo mode could be squeezed from this title…none of your bolted on solitaires, but a meaningful mechanic for the soloist. I have been giving this some serious thought and intend to either add to this article or produce a follow-up piece once I have shared my thoughts with the chaps at Paisley…and it is a website dedicated to all things solo-ish!

Key to this game becoming solo-able is creating a copetative oponent by integrating a simple to use/simple to manage hierarchy of actions re: acquiring components, hiring of staff, using staff special abilities and a meaningful, realistic endgame scoring. I dont feel the AI need handle money if an effective method of hiring staff and end game scoring can be established. These are the elements I have though long and hard about but I think my suggested findings will be brought to both sides of my table in a subsequent article. Watch this space for a link for player count may soon read 1-4 , albeit unofficially…A workable AI could equally make a 2 player game into a 3 player and, by extrapolation 3 into 4. We shall see what we shall see.

This is not the norm for both sides of my table, as multiplayer open buying games are not usually found in solo circles. That having been said, Planecrafters is (as a two+ player game) a lot of fun. In the early rounds everyone is much of a muchness…buying parts and producing simple craft but once the revenue starts to build and a players factory can invest in more specialist staff with their cunning special abilities, the game suddenly becomes an awful lot more strategic. Not only are we focused on acquiring good parts, combining the, for the maximum selling price but we are also sending spies into opponent’s factories! Stealing components or generally upping the production speed of our own work force. (cutting out cream cakes during work breaks and the like)

There are a wealth of eager chaps and chapesses willing to work for the right price. Some abilities are ridiculously strong…but they command a ridiculous salary, so that all nicely balances out. Heavy hitters will not be seen early doors! In some respects it becomes a race to churn out rubbish planes just to get cash to hire some very interesting staff…at least many of my games have gone that way…then with the right staff the real work begins. For a simple game it can become very strategic. Chosing which parts to acquire, when to build and plan which staff would benifit most. The run-of-the-ill workforce are in plentiful supply but more specialist individuals…well…you’d be lucky to find them on the unemployment line.

Planecrafters is a lot of fun with a titchy bit of “take that” when staff use their special abilities, plenty of buying, selling and bolting all manner of plane parts together in a light but strategic commerce game. I doubt this will tax the “heavy euro” gamer but in all fairness it doesn’t need to. A pretty quick set up allows a fun, light, competitive game to rev into full flight almost immediately…I am sure a competitive AI mechanic is feasible and as such, I would definitely enjoy this as a solo game for scratching a whimsical gaming itch when I don’t wish to melt my brain with ludicrously complex AI bot flow charts….we shall see what transpires from this point forward.

As it stands Planecrafters coughs and splutters its multitude of prop-shaft engines into life and (although I usually reserve my 1d8 rolling for the solo experience…as this is the prototype and playtesting section, I will make the occasional exception) soars to the sky for a BSoMT 1d8die roll of (6) Good solid entertainment that is crying out for a strong solo mode…I think that adding a solo mode would modify this roll by +1 to a magnificent (7)

…I thought things were going too well. Now all I have on the stock shelves is a bloody shed-load of wings and tails….no bodies or noses….what sort of affair can I construct with 3 pairs of wings and a tailfin? I might have to send my Thief into my competetor’s factory and ‘alf-inch a couple of suitable components…then we’ll be in business!